Hands of our ancestors

Grab a pencil, throw a ball, wave your hand. Statistically, you did all those activities with your right hand. About 90 percent of the world’s population is right-handed. Why might that be? Have humans always been right-handed?

Archeologists have found, through research, the answers to these very questions. Today we are going to look at some of the findings from archeologists and how they can show what was the dominant hand of our ancestors.

One of the ways archeologists have been able to tell the handedness of early man is by looking at teeth.

When early man was processing animal hides, they would hold the hide stretched out between one hand and their teeth and they would use a stone tool with the other hand to process the hide.

On several occasions, archeologists have found scratches on teeth from where the owner accidentally scraped their teeth with the stone tool. The marks predominately went from the upper left to the lower right side, showing that most early humans were right-handed. Occasionally, they would find cuts that went the opposite direction, showing the opposite to be true. 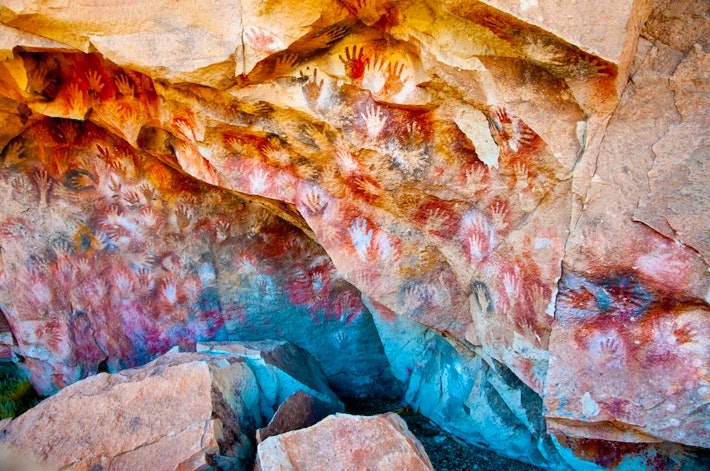 The Cueva de las Manos is a cave in Argentina that is adorned with stenciled paintings of hands. The odd feature about the cave though, is that almost all the hands on the walls are left-sided. One of the most accepted reasonings for this is that the child, as most of these are about the size of a 13-year-old, placed their left hand against the cave wall and then used a bone pipe to spray red ocher across the back of their left hand and onto the wall.

The reason that this may point to right handedness is that it is believed that the person doing the art would have held the pipe steady with their dominant hand. This is not the only place that handprints are found in prehistoric cave paintings. In fact, around the world there are many examples of handprints being used in art.

With the inclusion of the cave paintings and the teeth scratches, as well as some higher density in the right arms of early fossils found, it is generally accepted that early man, just as today, was predominantly right-handed.

The right side of the brain would have been freer for problem solving and survival tactics which would have helped our ancestors to survive.

The next time that you use your dominant hand, think about how important it is that trait was passed down to you and maybe you will find a connection to the past.