Snakes you can spot in Mecklenburg County, and what you need to know if you do

There are 37 species of snakes in North Carolina. Of those, only six are venomous. (Fun fact: The term venomous is used in place of poisonous because venom is injected while poison is ingested or touched.)

There are only two species of venomous snake found in Mecklenburg County, the copperhead and timber rattlesnake. Of these two, copperheads are much more common. 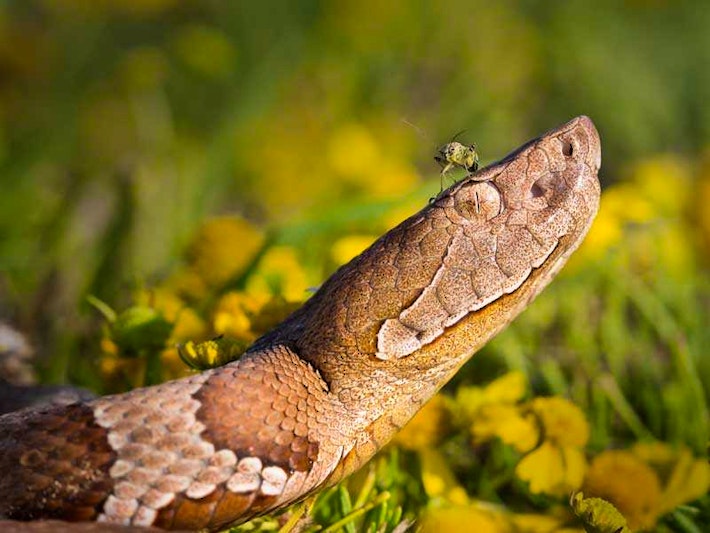 Copperheads are most easily recognized by their copper/light brown color and darker brown pattern of “Hershey’s kisses” along their sides. Younger copperheads look similar, just smaller and have bright yellow-green tails, used to attract prey. 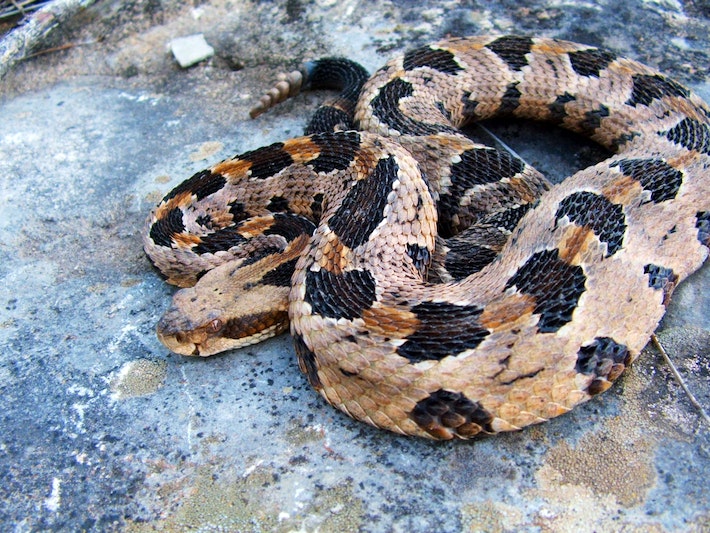 Timber Rattlesnakes are rare and have different patterns based on their location. In this area, they are yellowish to dark grey with an orange stripe down their spine and a series of broad, horizontal bands circling their bodies. The most obvious characteristic is their distinctive rattle.

Both the copperhead and timber rattlesnake belong to a group of snakes called pit vipers. Pit vipers are named for their heat-sensing pits, found between the eye and nostril, which help them locate warm-blooded prey. Pit vipers have a much more triangular head than most other snakes, but this is not a fool proof differentiation between venomous and non-venomous snakes.

Another trait of pit vipers in North Carolina are their vertically elliptical “cat-eye” pupils.

Generally, in Mecklenburg County any snake that appears uniform in color is likely non-venomous. All these species also lack heat-sensing pits and have round pupils. Here are six of the more common species: 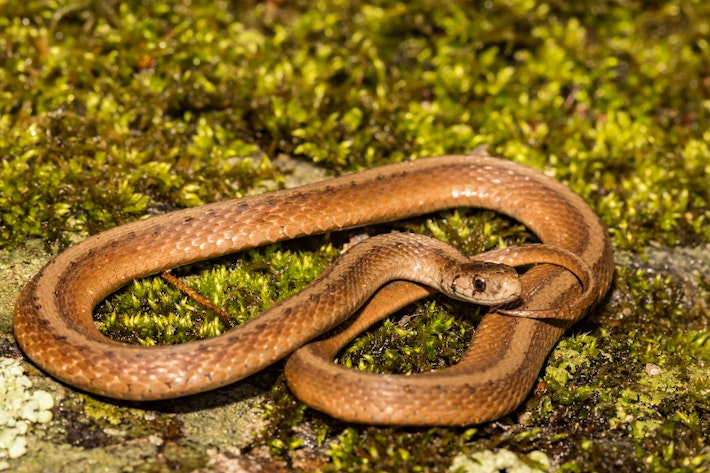 Brown snakes are only about 10 inches long and are often mistaken for baby copperheads. However, they have round pupils and differing patterns. Brown snakes are light brown to grey, sometimes with a stripe running down their spines and sometimes with small dark spots on their sides. They are good to have around the garden as they eat slugs, snails and worms. 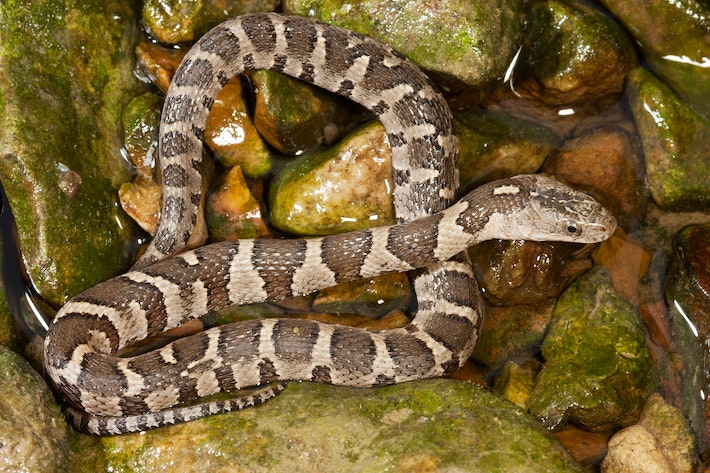 One of the most common snakes seen around water, northern water snakes are often mistaken for cottonmouths or copperheads. These snakes range from tan to brown in color and either have complete darker bands running down their backs or three rows of alternating splotches. Although they will flatten their heads when threatened, their pattern and round pupils differentiate them from venomous copperheads and cottonmouths. They mostly eat fish and amphibians. 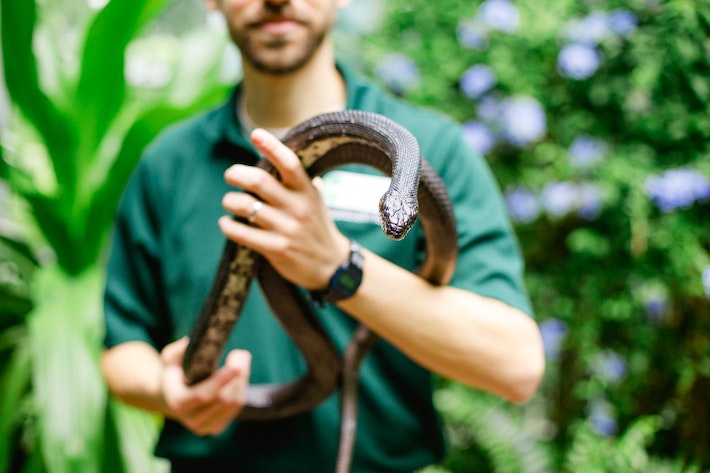 Rat snakes, also called black snakes, are usually either almost uniformly black or grey with darker splotches running down their backs. For both color varieties, their bellies are mostly checkered in white and black. These snakes grow to be over five feet long and often appear shiny. Younger rat snakes are usually pale gray with dark splotches and are often mistaken for copperheads. These snakes mostly eat mice and rats but will also eat birds and eggs. 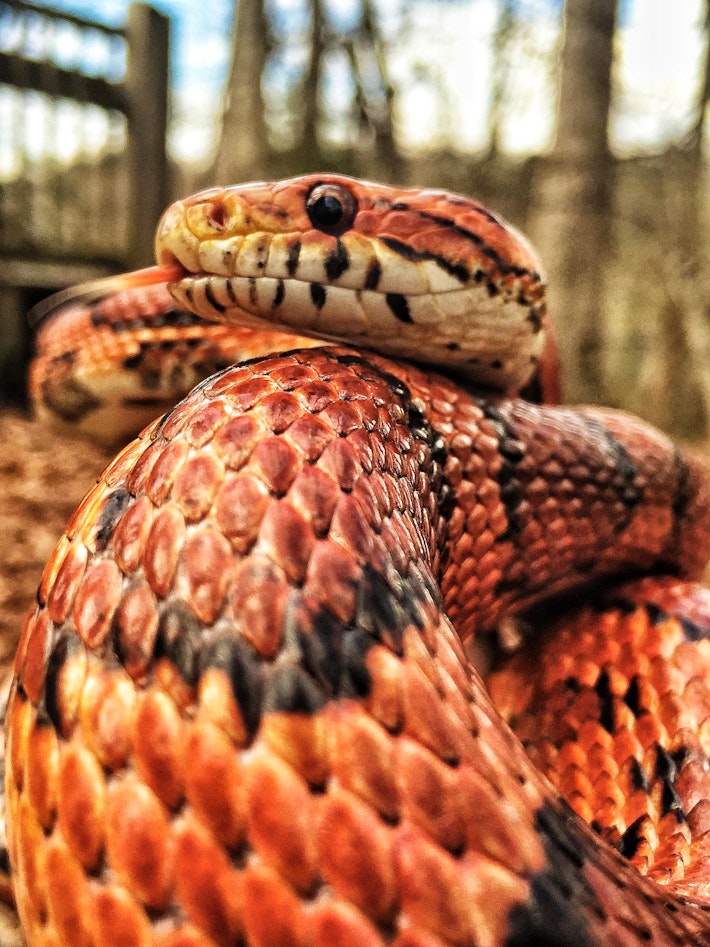 Corn snakes have similar patterns to rat snakes, but with different colors. Corn snakes range from gray-orange to orange-red and have dark splotches running down their backs and smaller spots running along their sides. Corn snakes are often mistaken for copperheads because of their reddish orange color. Corn snakes eat mostly rodents and birds. 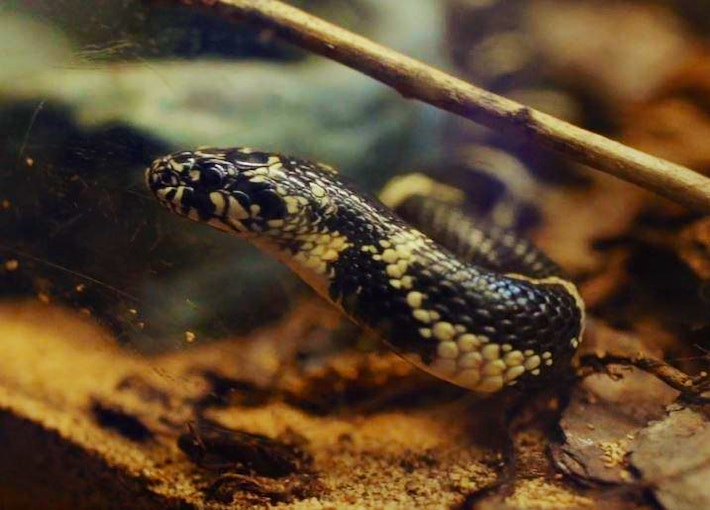 Eastern kingsnakes are very distinctively colored, black with white-to-yellow horizontal striping. Kingsnakes eat a variety of animals but gain their name from their immunity to the bite of venomous snakes like copperheads and rattlesnakes, which they will eat. Thus, kingsnakes are good to have around the house if you want to avoid venomous snakes. 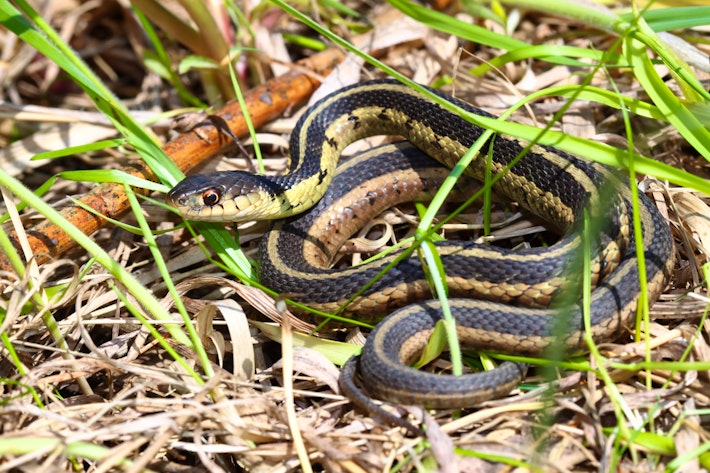 Garter snakes generally have a yellow-white stripe running down their backs, yellow-white sides, and a gray to brown, sometimes checkered pattern between the sides and stripe. Garter snakes mostly eat amphibians like frogs and salamanders.

What to do if you see a snake

Contrary to popular belief, snakes are not aggressive. Most snakes will either try to hide or run away when faced with danger. If you see a snake, do not pick it up. The best thing to do is to keep a safe distance.

If you do not want snakes in your yard, there are things that you can do to keep them away. Snakes like cover, so keeping your lawn mowed and removing brush piles and debris will make your yard less appealing to snakes and their prey. Despite popular opinion, mothballs have little to no effect on snakes.

As an additional note, because of their protected status due to declining populations, it is illegal to kill rattlesnakes and coral snakes in North Carolina.