Ask a Naturalist: Why do scorpions glow? 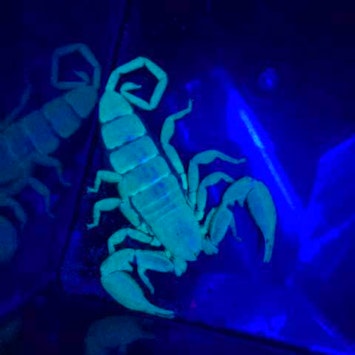 Did you know that scorpions glow when exposed to a black UV light? Have you ever wondered why?

To be truthful, we really don’t know. But there are some interesting theories as to why scorpions fluoresce when exposed to UV light.

We do know how they fluoresce, and that is due to the presence of beta carboline in their exoskeleton. Beta carboline will fluoresce when exposed to UV light, causing the scorpion to glow an eerie greenish blue glow.

So why do scorpions have carboline in their exoskeletons? Carboline chemicals are found in many animal cells, not just scorpions, and are thought to be sunscreens that protect epidermal cells by reflecting or scattering UV radiation.

Because scorpions appeared over 400 million years ago, research suggests that the oxygen levels were lower then, which means that UV light from the sun was pretty intense. It makes pretty good sense that these animals would be exposed to powerful UV radiation and would need to have or to develop some sort of protection, which could explain the presence of the carbolines.

In the desert and other areas of the country, including the Appalachian Mountains, this fluorescence is utilized for scorpion studies, surveys and population studies. Biologists have known about this for years and often conduct their studies at night to take advantage of this unique characteristic. Night hikes for scorpions are fascinating and amazing! 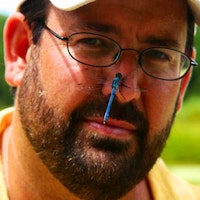